MASTER
Home
About
Get There
Tickets

By The Foundation (other events)

What is Brown Sugar Suite?

This live music REVIVAL will take you on a journey back to when you first fell in love with GOOD music. Giving you the thrill of of real hip-hop, jazz, R&B and neo-soul vibes.

Music was always present in and around the Ferguson house, which led to Zo! taking piano lessons at age 6… which he absolutely despised. The idea of working toward a Major League Baseball career served as the greatest inspiration through his teenage years much more so than the concept of practicing music. After his parents consistently pushed and encouraged him to stick with music, Zo! discovered a newfound passion by teaching himself how to play piano by ear by age 11. Zo! got his production start in 1992 when his parents brought home a Proteus MPS keyboard and a Brother PDC100 sequencer for him to figure out. Since then, he has emphasized the use of live instrumentation as the blueprint for his music while constantly looking to expand his sound with each album release.

“Rodgers lets the listener (and her man) know from the get go where things stand, opening with a defiant tone on the neo-soul midtempo, "Tell Your Story": "Tell your story at the door / 'cause I've heard it all before / and now I'm not so sure if I want this love anymore." By the time of the terrific next song, the acoustic gem "Home," Carmen is more reflective but just as resolved to end the relationship: "You say you want to come home / but home is where the heart lived / and I just want to move on / so should you."”— Chris Rizik, SoulTracks.com

Where:  The Door / Historic Deep Ellum 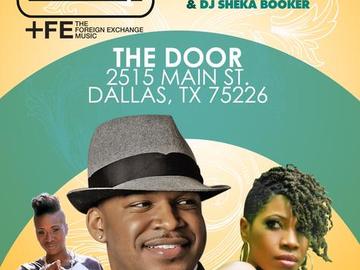 Must be 21 years of age to enter and have valid identification.

other events by this organization